Across the world, there is an enormous number of libraries. Some of them have stood the tests of time, known for their historic beauty. It would be impossible to pick just one library to call the most beautiful library in the world, but a few definitely make the short list.

Bristol Central Library and the Codrington Library of Oxford University are known as two of the most beautiful libraries in the world. England is known for its stunning architecture and these landmarks are nothing short of gorgeous. The Codrington Library was founded in the year of 1751, much older, compared to its counterpart, the Bristol Central Library born in 1906.

The national library of France, named Bibliothèque Nationale de France, is a popular tourist destination. This library is known for its beautiful architecture and for its size. The building was established in the year 1868. In the late 1800’s it was known for being the biggest book storehouse in the world.

Nestled in the historical dwellings of the King of Spain you can find the Library of El Escorial. King Philip the second, himself founded the library during his reign, and it has been available ever since. With the original mural paintings and sky-high vaulted ceiling, it is no wonder this library is considered one of the most beautiful in the world.

Macquarie University Library also makes this list. While Australia might not be known for its rich, historical architecture like most European countries, it is a beauty. Implementing state of the art, cutting edge designs it is a destination site for many tourists. Housing one of the largest collections of books in the world.

The United States of America 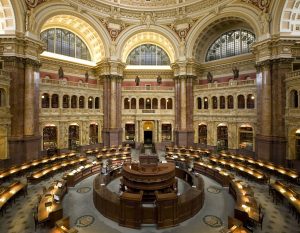 Home to a number of the most beautiful libraries in the world, the United States is famous for its gorgeous libraries and their rich history. The Library of Congress is a stunning landmark—very popular for tourism. They house the largest collection of books in the world.

That is not all though, the US is also home to the Stephen A. Schwarzman Library, the Jay Walker’s Library, the Frederick Ferris Thompson Memorial Library, the Harold Washington Library, and the Beinecke Rare Book Library which is at Yale University. All of these libraries are considered to be some of the most gorgeous in the world. They are all full of rich history and house vast collections of rare books.

While it would be impossible to choose between all of these beautiful, historic libraries they are some of the loveliest places in the world to visit. They are home to many events, galas, and more, in addition to their vast collections of novels and treasures.

Starting A Book Club Is Not As Hard As It Seems

Book clubs are a great way to get together with friends. You

7 Websites To Track And Find Out About Books

Are ebooks taking over printed books?